Are you a people watcher? I find it fascinating watching the body language of people; without staring or being creepy about it! Lol. I’m sitting in a cafe right now and at the table across from me, is a couple clearly trying to resolve something. The guy has just been sitting there, head down, looking very pensive, saying nothing. The girl is speaking softly to him, looking devastated like she’s trying to hold onto him. God…I am a staring! Haha. No, I’m not really. It’s amazing how much you can read from just a glance.

This is important to note. Whatever it is that’s going on with you, people generally can pick up on the vibe or energy. Whether it’s coming from your body language, tonality or for really intuitive/perceptive people, your energy. It’s not easy to hide from this, unless you’re a great actor! And is this a bad thing, that we’re often an open book? No, I don’t think so. We shouldn’t hide.

Being able to read people is an essential part of communication. Allowing yourself to be intuitive to the vibe people radiate, facilitates so much! It enables you to be sympathetic or empathetic; to decide whether or not to be argumentative, to crack a joke, to be supportive, to stick up for yourself etc. It also enables you to be street smart.

Whenever I am travelling on my own, my ability to read people’s energy is heightened. And even my surroundings – it’s not limited to people. It’s like I intuitively know to open my senses more. I bet you are the same. It’s instinctive because we want to protect ourselves from danger. It’s that sixth sense. But not everyone has this awareness.

My Tips For Being More Intuitive: 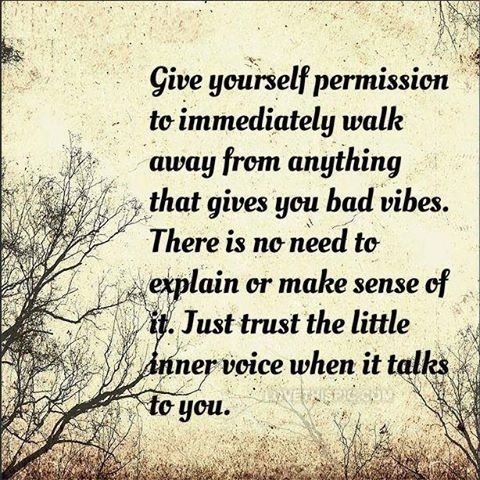 The couple I’ve been noticing out of the corner of my eye, just left. The girl had tears streaming down her face, the guy still spoke no words. Definitely a break-up

What are your thoughts? Do you think you’re quite intuitive to people’s energy? Do you think it’s important to be? I’d luv to hear from you!