Well this is the last post of my New York series! I was in New York for another 7 months  after this entry but I got so caught up in my life there, that I didn’t make time to write any more…such a shame in hindsight, but it’s all still in my memories. If you missed part 4, head here or to read from the beginning, start here.

Wow – so it’s the beginning of a new year already! And what a year it is going to be!! I wish everyone a fabulously exciting and successful 2007.

It has been quite a while since my last entry…sorry for being slack. I received an email from my dad this morning, telling me that my correspondence skills were failing…naturally that prompted me to write this next entry toute suite!

So I’ve been on holidays now for almost 4 weeks. My first term of school ended on December 8th, and what a fantastic term it was! The final month was very intense, crammed with many performances of scenes and monologues from various plays. My favourite performance I’ve done so far, would have to be a scene I did from the play Closer, which was also made into a movie. I played the role of Alice, which was the character Natalie Portman played.

My Aussie friend Bridget, played opposite me as Anna. I had so much fun working with Bridget! She is a great actor, and we had a lot of fun work shopping the scene for almost a month. By our final performance, I can confidently say that we ‘nailed’ the scene. Our acting teacher, Stephen Michaels, directed a production of Closer two years ago, so naturally the pressure was on. After our final performance, he told us that it was the best interpretation he’d seen! Woo hoo!

The most challenging performance I’ve done so far, was a scene from the movie Boys Don’t Cry. I was lucky to team up with Bridget again, who played the part of Brandon (a girl pretending to be a boy). I played Lana, Brandon’s love interest, and yes there was a kissing scene! Hence why this was my most challenging scene so far. With the risk of blowing my own horn, I have to say that we did a great job of what was a very difficult and confronting scene. The ‘shock’ factor was excellent! I don’t think Stephen or our class mates were expecting a big pash!

Had a fun night out with a couple of friends of mine from Strasberg, Eric and Jimmy! Jimmy is Swedish and Eric is from Long Island, New York. Both are terrific actors and really cool people. We started at my place for a few drinkie poos, and then ended up in Harlem at a house party! Lots of fun! 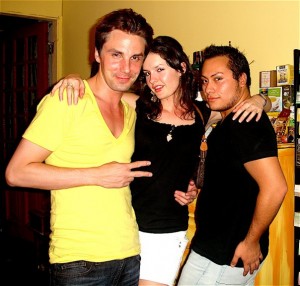 I will be resuming school on Jan 8th, which I am really looking forward to. Although the past 4 weeks have been great for recharging my batteries (and obliterating them!), it’s always a difficult time of year to be away from home. Luckily, I wasn’t alone! The awesome Aussie girls that I met at that marathon party a couple of months ago, were also in New York for Christmas and New Year’s. We had such a great time. My good friend Brooke, was an absolute star and arranged Christmas lunch for 25 Aussie orphans at an amazing French restaurant called Bouley. I’m telling you guys, the food was sensational! We had five courses, which were perfectly portioned, so we could fit every last mouthful in…well I could anyway!

I also had the pleasure of sitting next to the ex-Olympic swimmer, Elka Graham, who was in town on holiday with her fiance – both of whom are friends of Brooke’s. What a fantastic girl! We hit it off immediately, and quickly worked out that we know a lot of the same people in Sydney. The world truly is a small place!

After lunch and lots of alcohol, we all then went on our merry way to a bar at a swish hotel around the corner, for more cocktails and a second round of food! A few hours later of course! I’m proud to say that I was one of the few that made it to the end.

New Year’s Eve was also a blast! Much of the same crew plus more, all teamed up again to go to an Australian/Kiwi owned bar/restaurant called Public. It was $100 a ticket for drinks all night plus canopies – a pretty good deal, although the place was so packed out that I hardly saw any food. Not a good thing when you decide not to eat dinner because you’re hoping to fill up on finger food! Won’t be making that mistake again!

Not much else to report on at this stage. Still a single girl in the city, which has it’s highs and lows. My family are convinced I’m going to fall in love with a Yankee!! Don’t know about that one, but we’ll see. Ha ha!

Will write again once I’ve started back at school, and have some exciting news.