Ah, New York! This is part 2 of a blog entry from when I was living and studying acting in NYC from 2006-2007. If you missed the first one, check it out here.

Wow! What an amazing week I’ve had! I started school last Monday, which was exciting and nerve wracking all rolled in one. I was surprised at how incredibly international it is! Of all my classes, there are only a maximum of 3 Americans in each class. Very interesting and eclectic. I’ve really hit it off with a few girls…this is a pic of us before heading out one night (that’s me with my natural brunette hair color – second from the left!). 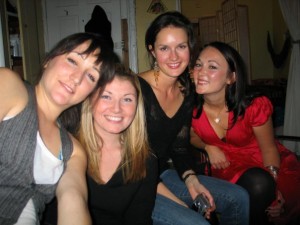 My classes for this term consist of: method acting technique (2 classes per week), singing, tap dance, stage combat, vocal production, dialects, and script analysis. At this stage, the method acting and tap dance classes have been my fav, but they’re all fantastic.

The teachers are incredible, and man do they work us hard! Most of the method acting teachers trained with Lee Strasberg before he passed away, and have been actors/directors/producers themselves. Some are still working actors today. One of my acting teachers (Susan Grace Cohen) has been a coach to James Spader, James Gondolfini, Linda Hamilton plus many more. Pretty Impressive! I asked her about James Spader, and she said that he is a bit of an odd character, but is extremely intelligent with so many thoughts running through his mind at once, that even he can’t keep up.

There’s another acting teacher at Strasberg, George Loros, who can be seen as Raymond Curto on the series the Sopranos. I hear he’s very strict, takes no crap and expects only great work. I’m going to change to his class! I love teachers who really push you.

My script analysis teacher is a bit of a cool cat. His name is Ted Zurkowski and is a lifetime member of The Actors Studio (a very elite acting studio you have to go through two auditions to get into. It was set up by Strasberg in 1948, before he opened up the institute I’m studying at in 1979. Al Pacino, Robert Duvall, Robert De Niro, Marlin Brando, Marilyn Monroe, Dustin Hoffman, Sally Field etc, all studied there with Lee Strasberg).

At first I couldn’t work out if Ted was the teacher or a mature age student, because he had cowboy boots on, a leather jacket, his shirt was open exposing his chest and he walked like Keanu Reeves from Bill & Ted’s Excellent Adventure! Turns out he’s also a singer in a band. Go figure.

There are about 5 Australian’s I’ve met so far, one of which has become a good buddy (Bridget Borgobello). She came to NY with her boyfriend, Sol, and studied with the same acting teacher as me in Melbourne. She’s a great girl and very talented. We were thinking of finding a place together, but the two of them ended up getting their own pad. 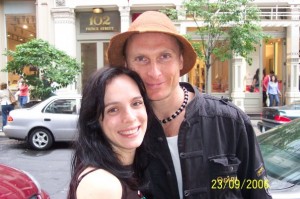 Apartment hunting has been a f***ing nightmare. But, um, character building! It is New York after all. Gotta love a challenge!

I did finally find a place in Williamsburg, Brooklyn, which is only 10mins on the subway to school. Very convenient. It’s a massive two story home, which I’ll be sharing with two girls around my age. The landlady lives on the first floor, and is really cool. She’s selling the house, so the maximum I can stay is 2-3 months, but this is perfect. Even though Williamsburg is close to Manhattan, I would prefer living in the city eventually. Maybe after the winter.

A good friend of mine’s sister, Jacki, was in town last weekend so we caught up and went to an amazing restaurant called Soho House. Jacki’s sister knows the owner which is the only reason we were able to get a booking. You have to be a member to dine there and drink at the bar – a rather ‘exclusive’ restaurant you could say. You can’t even use your phone or camera inside the restaurant – I politely got asked to put my camera away twice. I just wanted to take a pic of the amazing presentation of the food! The best meal I’ve ever had actually. The chocolate fondant dessert was sensational.

I had a very interesting experience Saturday night just gone. Bridget & Sol took me to this eye opening art gallery called Cosm (you would love it Mum). Some of you are probably familiar with the work of artist Alex Grey? I had never heard of him, which made the experience even more fascinating.

If you go to the website www.cosm.org and read Alex’s Faculty Bio, that will give you some insight into his art. To sum it up, the exhibition was of his 21 life-sized paintings and Sacred Mirrors, which examine in detail the physical and metaphysical anatomy of the individual. In all his paintings, the body is portrayed as translucent so you can see the full anatomy. Mesmerising stuff! Then after the exhibition and his talk, there was a massive dance party which attracted a huge ‘hippy’ crowd.

The music was unbelievable! It was a mix of trance, jungle and drum ‘n’ base. It was classic watching the hippy’s dance. The music was pretty fast with a deep beat, yet most of the crowd looked like they were flower children on LSD. Very entertaining to watch. They also had fire dancers and a live hip hop band in a different room. It was an unreal night!

Well I’ll leave it there. No doubt I’ll have heaps to share with you next entry!

P.S. Carolyn – thanks for telling me about Cafe Gitane in Nolita! You were right about the coffee – it’s the best I’ve had so far in NY! xx