Well, it certainly has been a while since my last update on Candi’s journey – 4 months to be exact. I’m sorry to all of those who have been following her progress, keen to know what the latest is. To be honest, I’ve thought about writing part 5 for weeks now but every time I went to write about it, it seemed too hard. Too emotional. Too raw.

I feel good about writing it now though. Candice has been making a lot of progress! I will fill you in shortly.

Let’s start with Christmas Day. Candi was allowed to come home for a few hours which was such a treat (she also comes home every Sunday now for a few hours to have lunch and watch a dvd with us :-)). She was mostly in good spirits and her level of pain only started to become a bit much to bare towards the end. It was really upsetting having to open her presents for her and feed her lunch. All the little things we so take for granted. There were times when the reality of her situation became quite evident and we could all sense deep sadness from her. This affected all of us, but particularly my Dad who has been struggling ever since. 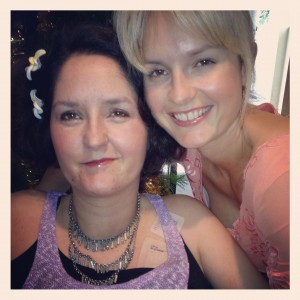 In the last post I told you all about how bad the communication and level of care had been at the hospital. Unfortunately, this hasn’t changed much. Candi was put in a shared room so there would be more nurses to patients, which seemed to be working initially even though Candi wasn’t too thrilled about sharing a room. She stayed in the room for about 3 months and for the last month at the hospital, had a room to herself again which was much better as she could get more rest due to less noise and visitors.

In January we had a another team meeting with Candi’s specialists to discuss where to from here. The hospital don’t really support patients going to The Institute of Functional Neuroscience or IFN (and refuse to see or take any phone calls from Dr Randy Beck), and I know they were beginning to feel like Candi wasn’t getting full use of their recovery plan as we had said “no” to the Botox injections and Mum decided to pull Candi out of the daily physio as every time we’d take Candi back to IFN, they’d have to put her shoulder back in! So the hospital were getting pretty shitty and were butting heads with my Mum quite a lot.

At the meeting the general gist of it was basically ‘our way or the highway’. Knowing that we needed Candi to stay there for at least a couple more months until we decided on the next best facility, we had to be compliant. What we were not expecting though, was a rather heated debate between my Mum and the extremely defiant psychiatrist! A few weeks previously, the psychiatrist came in to see Candi and to assess her for the second time. Being unable to communicate properly due to her strokes, even though by this stage she had full comprehension, made it difficult when the psych asked Candi questions. When she did explain to Candi that she thought putting her on a low dose of anti-depressants might be a good idea, Candi said very adamantly that she didn’t want to have them. My Mum also asked her, and again she said no. My Mum has a very strong opinion about this (in fact she wrote a whole chapter on psychiatrists and anti-depressants in her thesis for her doctorate!), and told the psych she didn’t think it was necessary at this stage as Candi was experiencing “appropriate sadness”, not depression, and even the psychologist agreed. So it was a no from my mother. The psych was not happy about this. She also seemed to believe going on them could help with Candi’s pain, but my Mum had her reservations about doing this.

So at this meeting, the psych brought it up again and asked both of my parents if they would be willing to trial Candi on anti-depressants. My Mum said no again and explained why, and my Dad said he felt he needed to know more about the drug first to make an informed decision, but wasn’t totally against it. So then the psych literally threatened my Mum and said that she would take her to the Tribunal and have her replaced as Candi’s dual-guardian if she refused to put her on the drugs! Can you believe that?! And she was so arrogant about it, I was quite shocked. My Mum did not take too kindly to being threatened and I felt so sorry for her being bullied like that.

To be compliant with the hospital and to not ruffle anymore feathers, my parents agreed to trial Candi on the anti-depressants on the proviso that Candi has the right to go off them at anytime. It’s the coming off them we’re worried about, but we’ll see how she feels on them. We also let her begin physio again but only with the head physio – when she was on holidays her replacement always caused Candi so much pain and her shoulder would pop out.

On the bright side, the week before we had the team meeting, Candi had her 6 week review scan at IFN! And you wouldn’t believe the results…the part of the brain that deals with comprehension was completely normal! We all had been thinking her comprehension was all there for quite a while now, and the scans prove it. There were other areas of her brain that showed vast improvement and she’s been getting much more movement in her neck, shoulders and right arm plus her speech has also improved hugely! Pretty much every week she is saying new words and starting to string some sentences together which is wonderful.

Dr Beck (who received an international award at the beginning of the year for the top neuroscientist in the world!!!) was very happy with the results, so kept her treatment the same for a further 2 months and has only just begun with some new treatments and exercises.

As I’ve mentioned several times, Candi’s level of pain has been debilitating for her. Trying to think outside the square and try other avenues, we decided to take her to get a hair mineral analysis to find out what minerals she was lacking in and then made an appointment with Dr Tabrizian from Health Quest. The clinic is run by doctors who specialise in nutritional medicine. I wrote a post about my hair mineral analysis I had there, which you can read about here. My Mum was treated by Dr Tabrizian when she had a few minor heart attacks a couple of years ago, and he gradually got her off all of the meds the doctors put her on.

Taking Candi to see him was perfect, as being a doctor, he knew what supplements to prescribe that wouldn’t interfere with the drugs she’s currently taking.

Mum also did a lot of research into Chinese acupuncturists here in Perth, and found an amazing woman who also has a background in neuroscience. And oh my, Candi has had incredible results since being treated by Yan Li. Her pain levels have dramatically decreased and her arms have also released more. We think the combination of what Dr Tabrizian has put her on, the treatments at IFN plus now the acupuncture is all taking effect very positively!

Last week Candi was moved to the Quadriplegic Centre literally across the road from the hospital, which made it an easy move. She has her own private room and my brother bought her a big plasma TV and has installed Foxtel for her…she is so happy! We’re very relieved to have her out of the hospital now! The quad centre is a great stepping stone until we get the funding to bring her home, which could take up to 2 years sadly. The staff seem really nice and so do the residents. It’s definitely a lot more relaxed and friendly as this is more of a home environment.

The Occupational Therapist and Physiotherapist are both lovely and Mum said they seem excellent and much more advanced than the hospital. We’re all very relieved Candi can stay at the quad centre for however long she needs.

It’s now been 8 months since my sister had her accident. It’s certainly been a challenging time for all of my family, particularly my sister of course. Candi is my daily inspiration. She is such a beautiful soul and I love her so much!

She naturally has her moments when she feels defeated – like what’s the point of even going on. She still says “It’s fucked” quite a lot…who wouldn’t?! It is fucked! But these moments don’t often last too long. My Mum is wonderful at keeping her spirits up and all of us are always positive around her. However when she’s feeling down, we allow her to feel the emotion.

I love how much closer I’ve become with her. Candi and I always had a special bond growing up…she has always loved me so much. When we were kids, she was always around me, protecting me and playing with me. She’s always been my biggest fan.

Every time I go in to see her, she tells me I’m beautiful and that she loves me. Every. Single. Time. And the sincerity in the way she’s says it makes my heart tingle with even more love and admiration for her.  I came in to visit her really early in the morning a few weeks back. She was still waking up and when she first looked at me I think she thought I was one of the nurses; but when the nurse said to her “your sister is here Candice” she opened her eyes so fast and looked so surprised and excited to see me and kept saying “oh Lizzie, Lizzie, yay Lizzie is here. You’re beaaauutiful. I loooove you.” She’s always happy to see me, but this particular moment when she realised it was me, I will treasure forever ♥